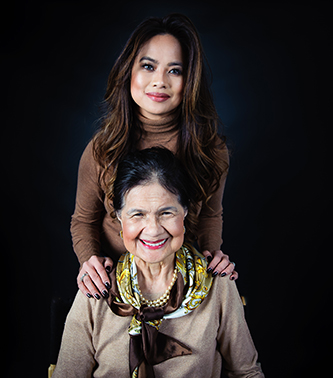 “A lot of people automatically assume that I’m American because of my accent. But I’m not. Currently, I am a legal permanent resident. I have this “accent” because of the different places I’ve lived. Actually, my entire immediate family is American, either through marriage, naturalization or birth. I’m married to an American and my kids were born  here  so  that  makes  them  American  too.  But,  we  are  multicultural.  Zac,  my husband, is part French / German and half Thai. I am a Filipina.

My father was a diplomat for the Philippine Embassy. My family lived in numerous places like Mexico, New York City, Philippines, Morocco, Thailand, LA because of his job.

When I was younger, I didn’t look forward to moving because it meant that I had to leave my friends but, at the same time, it was exciting to see new places, experience new cultures and cuisines. It made me appreciate people from all walks of life. Even though we would feel that “culture shock” moving to a new country, we quickly felt at home with the people we would meet because of their hospitality, kindness and same family values. The friendships I’ve made along the way I’ll cherish forever.

My father has since passed and my little family has now planted itself in Oregon. We love it here. We have lived here for almost twenty years while my mom has been living with us for the last decade. Some people are surprised by that but she’s family and family is everything. No matter where we live, home is always where family is.”

“My family moved to the United States from Bangladesh when I was seven years old. We arrived in New York City in 1997, and I remember that we lived in a two-bedroom basement apartment in Queens, which we shared with a roommate. My older sister had her own room and I shared a bedroom with my parents. We didn’t own a house or a car but  I  remember  always  being  a  very  happy  kid  and  never  feeling  like  we  lacked anything. My parents worked incredibly hard to provide a better life and future for their two daughters. They had great jobs in Bangladesh, working for the United Nations Development Program, but they knew that if they remained in Bangladesh, the opportunities were limited and the future uncertain for their two daughters. So, they left behind friends, family, their country, language and culture, to start from scratch in a brand new world with dreams for a better future.

My family and I represent the true story of so many immigrants who come to the U.S. for the American Dream. A chance at a better life. The American Dream is this idea that anything is possible, as long as you are willing to work hard for it. To me, being an American means exactly that: I can do anything because I live in America, where anything is possible as long as I work hard. My parents taught me this through their experiences, and worked hard every single day, sometimes more than 2 jobs, and eventually bought a house, cars, and helped both my sister and me pay for college. They labored even harder to become U.S. citizens. It took them more than 10 years, but eventually with great financial investments, numerous courtroom trials, and countless visits with immigrations attorneys we finally became citizens.

Today, I am a 27-year-old proud American woman with a great beginning career in international diplomacy; I have travelled the world, and now find myself at the University of Oregon with a full scholarship to the International Studies graduate program. I believe all of this is a result of my immigrant parents’ dreams and endeavors. I’m an American but my roots are that of an immigrant. Today, I am scared for my country and the direction the current administration is taking us. I hope that we can still be a nation that welcomes people from all over the world and be a refuge for those seeking equality, justice, or simply, a better life. America is stronger because of our diversity in people and cultures.”