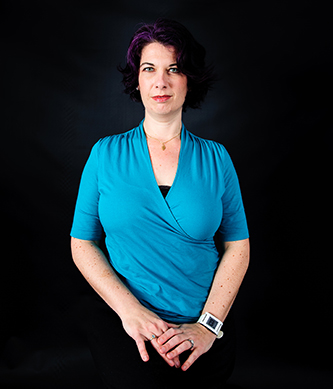 “We moved to the United States when I was 14 years old. That was 26 years ago. I was born in England but moved from Barbados to Central Florida. It was an interesting experience and there was definitely a lot of culture shock because I came from a tiny island  with  less  than  300,000  people.  For  the  most  part  I  felt  welcome  unless  I disagreed with people. And as soon I disagreed with whatever I was hearing or with whatever people were saying or their sexist attitudes I was told to go back to where I came from. I heard that a lot in my first few years in the U.S. I told them I could not go back to where I came from and they were stuck with me. Because we were unable to go back to Barbados and unwilling to go back to England.

My mom was French and she didn’t want to go back to England anyway. I learned to sound less English and more American so that people would understand me and not make fun of what I was saying. I learned to write in American cursive because my freshman English teacher forced me to. She wouldn’t accept my papers unless they were written in American cursive. I had to stay after school to learn it. Not that there was anything wrong with my English cursive handwriting. It was interesting. There was a lot of ‘this is how we do things in America and if you are going to be in America, you have to do it this way.’ That faded over the years. I found either I became accustomed to it or I was less outspoken or I moved to places that were more accepting.

The one time that really came up prevalent again was after 9/11. It seemed like if there was any dissent or if I believed or said anything that seemed to indicate I wasn’t sharing in the tragedy and in the feeling it was because I wasn’t American. It was bizarre in that sense. Because it was all of us. It was about all of us. It wasn’t just about Americans. Because more than just Americans died that day. I think being an immigrant today in America depends a lot on where you come from and the color of your skin. I am a white English woman. So I am relatively acceptable. I am not a threat. I don’t look different other than my purple hair. Americans like English people in general so I am viewed differently and accepted differently. If I was Muslim or if I was brown skinned I would feel a lot differently. I am an American citizen now. And I am glad I’m an American citizen because if I wasn’t and even being from England and being white, I wouldn’t feel safe in this country right now. I am glad to be an American citizen. I realized after my son was born that even as a legal permanent resident, that depending on the administration, depending if I upset the wrong person with the right connections I could be deported from the country for a minor infraction. I could protest, I could be arrested for standing up for my rights and for other people’s rights and that could be used against me as a legal resident and be deported from this country so I became an American citizen so that would not happen.”