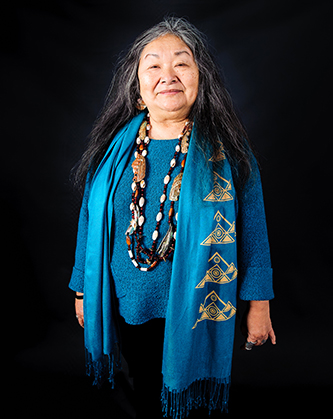 “My story never begins with my birth.  My story always begins with my immigrant grandparents, both of whom came from a small village in Gifu-ken on the Gifu River. My grandfather, Shichiro “Frank” Kawai, worked in Richmond, California greenhouses and helped build the short-line railroad  between Wyoming and  Montana. Once he settled with farming in Idaho, he went through an “omiai” in Japan and returned to the United  States  with  my  grandmother,  Misao  Ota  Kawai,  a  sewing  teacher  who immigrated and worked side by side with her husband in Idaho fields.

I was born into a time that was very difficult for my Nikkei people, two months after World War II, a war which caused the forced removable of Nikkei immigrants and their American born children into concentration camps. One of the desert camps, Minidoka, lay just miles away from my birthplace, Twin Falls, The internees there were from Oregon and Washington.

There were several discriminatory laws, and one of them was the Alien Land Law preventing Nikkei from owning land, even the American born.  This law was revoked in the 50’s and many Nikkei moved to lands opened to homesteading, probably taken from the Shoshone people.  My family bought some land in Marsing, Idaho.  My socialization to America began there in Marsing Elementary School.   It is only after becoming a mother and grandmother that I understand that I lived in a hostile environment. Even teachers disliked the one Nikkei girl.  As children, everyone just accepts how they are treated and internalizes the judgment of others.  No matter if I may have felt alone in school, I went home to a three-generation family, all living together, the Issei grandparents at the head of the family and surrounded by my mother, two uncles and an aunt.   My sister and I grew up with a feeling of being very rooted and safe with family.

Although I became an adult in the tumultuous Sixties, during the war in Viet Nam, that rootedness helped me to navigate.   I became a teacher very focused on a safe classroom for all my students and joined like-minded teachers to make changes in the system.  I was drawn to building an Asian community presence as well as living in solidarity with other communities of color. We became a family away from home.  In this endeavor, we all gratefully accepted the hospitality of the Native people of the Longhouse Community. For the past thirty years, from the time my husband and I became parents, I yearned for a childhood like the one I had as a child for our daughter and good fortune led me to the Winnemem village near Bear Mountain, to a house full of elders and with kittens, puppies, ducks, hens and a rooster; my children thrived with the influence of the generations. The Winnemem took my whole family in, even my elderly mother.  So here I am, for thirty years now, an immigrant like my Grandmother was in 1919.  My shift was from being American to being Winnemem Nikkei by another river, not the Gifu but the McCloud.  We are salmon people and water protectors.    My name is Misa which means “Life is Beautiful. “  My Winnemem name is C’wisa,  “Full of Song.”